‘Black Leadership Matters’: Why a Racial Rift Is Growing Among N.Y. Democrats 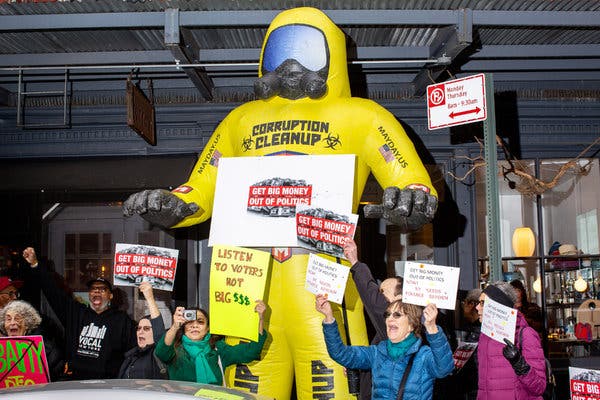 As big-dollar political donors recently gathered at a TriBeCa wine bar to honor one of the country’s most powerful black state lawmakers, protesters converged outside.

Waving signs and chanting, shouting to be heard in the bar’s darkened interior, they demanded an end to big money in politics. They were Democratic activists — and their target was one of their own: Carl E. Heastie, the Democratic speaker of the New York State Assembly.

But they also had to shout over the sound of counterprotesters: an equally sized group of black community leaders, who had assembled to support the speaker and denounce the activists.

The progressive movement in New York has been credited with overturning politics in Albany: The Legislature is now under Democratic control for only the third time in 50 years. But the progressive push, fueled by many newly energized activists, has also alienated some of the party’s old guard of black leaders, igniting an internal battle with racial overtones.

Black community leaders have leveled accusations of paternalism. Black lawmakers have warned of a gulf between activists’ priorities and those of their constituents. Even black activists who are part of the insurgent wing have cautioned of overreach by white progressives. Carl E. Heastie, the first black man to hold the post of speaker of the New York State Assembly, has been accused by some Democratic activists of being slow to embrace a more progressive agenda. – Natalie Keyssar for The New York Times

“People talk about how black lives matter,” said Charlie King, a longtime Democratic operative and a former senior campaign adviser to Gov. Andrew M. Cuomo. “Well, black leadership matters. If white progressives can’t respect that, they will be made to respect that.”

Since President Trump’s election in 2016, Democrats nationwide have grappled with whether a new wave of progressive energy — fueled in large part by young people and well-off white suburban women — represents black voters, the longtime pillars of the Democratic Party.

In New York, the debate has taken on particular weight. Black Democrats now lead both houses of the State Legislature, after years of Republican opposition. In the Assembly especially, black lawmakers have risen under Mr. Heastie’s leadership, as have those with ties to the Bronx County political machine that Mr. Heastie once led.

Some of those freshly cemented power brokers are now bristling at the suggestion by newly prominent activists and elected officials that they have not been progressive enough on issues like rent regulation, new taxes on the ultrawealthy and campaign finance reform.

They call such criticisms misplaced and racially charged, and they suggest that the activists do not represent the communities they claim to speak for.

“What the driving force of this movement cares about isn’t what communities of color care about,” said State Senator Brian Benjamin, a black Democrat who represents Harlem.

The issue came to a head outside Mr. Heastie’s fund-raiser last month, when progressive activist groups like Indivisible and Rise and Resist, which formed after the 2016 presidential election, organized a protest. Black leaders arrived to counterprotest. The dueling groups lined up on opposite sides of a sidewalk: the protesting activists, many of them white, facing the counterprotesters, all black.

The activists “don’t look like us, don’t live with us,” said the Rev. Troy DeCohen, a pastor who leads the United Black Clergy of Westchester.

The new groups draw strong support in primarily white neighborhoods in Manhattan, Brooklyn and Westchester. Several of the protesters at Mr. Heastie’s fund-raiser lived in the West Village.

Some of the candidates backed by the new groups last year, though diverse in race and gender, won significantly more votes in gentrifying areas of Brooklyn and Queens than in predominantly black or brown neighborhoods. Their rivals had accused them of siding with gentrifiers over poorer communities.

But the groups also include members from diverse demographics; local chapters dot the Bronx, Brooklyn and Queens. They support racial justice priorities such as criminal justice reform and more school funding.

They also work closely with unions and longer-standing activist groups that are well known for representing — and being led by — working-class people of color. 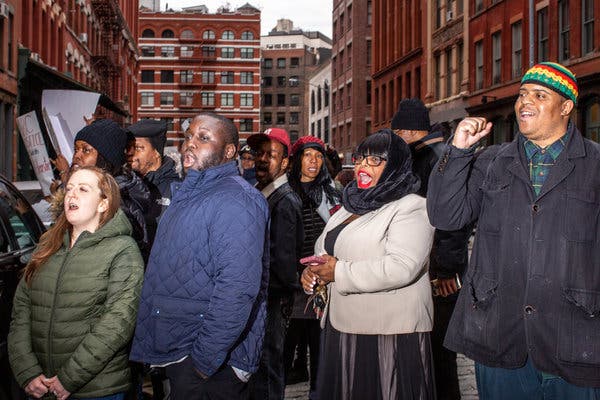 “I was deeply offended by the suggestion that it was only white progressives,” said Jawanza Williams, the lead organizer for VOCAL-NY, which focuses on issues like criminal justice and homelessness.

Mr. Williams, who is black and formerly homeless, helped lead the protest outside of Mr. Heastie’s fund-raiser. “It erases the struggle of black organizers who are progressive.”

The protesters at the fund-raiser emphasized that their criticism was not of the Assembly speaker as a black man, but for the role they said he played in delaying campaign finance reform.

“What struck a chord was the hypocrisy,” Livvie Mann, of the group Rise and Resist, said of Mr. Heastie. Ms. Mann, who is white, organized the protest. “Days after the budget, he does a huge fund-raiser, and it felt like a slap in the face.”

Kirsten John Foy, president of the activism group Arc of Justice and one of the organizers of the counterprotest, said he agreed with the need to get big money out of politics. But he took issue with the protesters’ tactics and their lack of diversity.

Mr. DeCohen said black members of the activist groups had been “brainwashed.” He added, “We always call them the Uncle Toms.”

Jason Walker, VOCAL-NY’s campaign director, replied that he was surprised to “see the black faith leaders take the playbook” of racial division.

“As a black millennial and a progressive, I’m looking for my leaders to set up the next generation to win,” he said.

Mr. Heastie, in brief comments to reporters as he entered the fund-raiser, brushed off the criticism. The political action committee for which he was fund-raising gave $50,000 last year to help elect more Democrats to the Senate.

“History will show that the Democratic Assembly has always been the progressive champions,” he said. “That’s what people should be looking at, on the actions that we take.”

The tension arrives at a key moment in New York history: Along with Mr. Heastie’s historic ascent to the speakership, Senator Andrea Stewart-Cousins this year became the first black woman to lead the State Senate. Democrats had seized control of both chambers of the Legislature on a promise to quickly enact sweeping change. Democratic activists defended their right to criticize Mr. Heastie, and insisted that their protests were not racially motivated.

But the party has disagreed about what changes, when, and in what order.

The $175 billion state budget passed on April 1 included major progressive victories, including limiting cash bail and releasing money for the city’s public housing system. The black leaders said those achievements should be celebrated, and suggested that campaign finance reform was a lower-priority issue.

“I’ve never had one person in Central Harlem and East Harlem say, ‘Brian Benjamin, go to Albany and get me public financing,’” said Mr. Benjamin, the state senator, though he said he supports the idea. “They want affordable housing, money for education and criminal justice reform.”

But proponents of public financing said getting big money out of politics would make other progressive goals possible.

Ricky Silver, a lead organizer of the group Empire State Indivisible, called public financing the “tip of the arrowhead as it relates to all progressive issues.” Studies have shown that donor diversity increases in public matching systems.

“He, as the leader of the Assembly, represents the entire state,” said Paul Rabin, a member of the group Rise and Resist.

Still, several black leaders who were not at the protest said that while they agreed with the activist groups’ goals, the groups should be conscious of how their actions might appear to observers.

L. Joy Williams, the president of the Brooklyn N.A.A.C.P., said “optics and public perception” of the issues activists were fighting for could sidetrack their cause, rather than advance it.

Jamaal T. Bailey, a state senator who represents the Bronx and Westchester and considers Mr. Heastie his political mentor, said Democrats should focus on party unity, citing lyrics from the Jay-Z song “Family Feud.” “Nobody wins when the family feuds,” he said. “What’s better than one Democratic majority? Two.”

Even black activists who have been heavily involved with the new activist groups warned that certain voices should be careful not to drown out others.

Sherese Jackson, who until recently was the only nonwhite board member of Indivisible Nation BK, an activist group in Brooklyn formed after 2016, said the group often discusses how to increase diversity. But the discussions had yet to turn into real change.

“It is definitely a struggle as a woman of a color,” she said, “feeling 100 percent safe in a mostly white, progressive world.”

Events such as the protest against Mr. Heastie, even if well intentioned, could further deter nonwhite people from joining, she said.

“The visual alone — I could see how that could come across to people, and it could be a turnoff,” Ms. Jackson said. “This does not help the trust factor.”