The 48-page indictment said the Hunters attempted to conceal the eight years of spending in federal records, while their household budget was awash in red ink

By Christina Bravo and Audra Stafford

A judge granted attorneys for California’s Republican Rep. Duncan D. Hunter and his wife, Margaret Hunter, more time to review the more than 12,000 pages worth of data against their clients at a brief status hearing Monday.

The Hunters pleaded not guilty to charges of misusing $250,000 in campaign funds for personal use, including a family vacation to Italy, Hawaii, school tuition, dental work and theater tickets, among others.

The 48-page indictment said they attempted to conceal the eight years of spending in federal records, while their household budget was awash in red ink.

Protesters Gather Outside Hearing for the Hunters

Protesters carrying musical instruments and others dressed in costumes, including a 12-foot inflatable man in a hazmat suit, nicknamed Cleanup Carl, awaited the Hunters as they walked inside the Southern District of California courthouse in San Diego Monday.

“I hope we raise awareness that it’s not too much to ask for honesty in our elected officials. I mean, really, is that unreasonable?” Harrington said.

Duncan Hunter’s lawyers said in 2017 that he and his wife repaid the campaign about $60,000, including the $600 airfare fee for the rabbit.

Even with the charges, Hunter is considered to have a strong chance of winning his sixth term on Nov. 6. The 50th Congressional District east of San Diego is the most Republican in Southern California, where the party holds a nearly 15-point registration edge over Democrats. The Hunters went through a side door at the courthouse, avoiding the group of about three dozen near the front entrance.

In court, Duncan and Margaret Hunter’s defense attorneys said they needed more time to review the alleged evidence against their clients while prosecutors said since it is a “simple” case of embezzlement, more time was not necessary.

A judge sided with the defense stating it was wasn’t unreasonable that they would need more time considering the many years over which the alleged crimes occurred. Another status hearing was set for December 3.

Margaret Hunter, who was at the time of the allegations Duncan Hunter’s campaign manager, has arrived at their three court appearances separate from her husband.

Both Hunter and his wife Margaret were indicted for misuse of campaign funds Tuesday afternoon. NBC 7’s Rory Devine reports from the courthouse.

The day after they were indicted, Duncan Hunter appeared to blame his wife, who was the congressman’s campaign manager at the time, for any misappropriation of funds. He later told NBC 7 that he wants prosecutors to leave his wife alone, contradicting his previous remarks.

“My message to the U.S. attorney here is let’s get this in court,” Hunter said last Tuesday. “Leave my wife out of it, we know they’re not after her they’re after me. They want to flip the seat, so let’s go to court let’s have a trial and everybody will see everything.”

Rep. Duncan Hunter Says ‘Leave My Wife Out of It’ 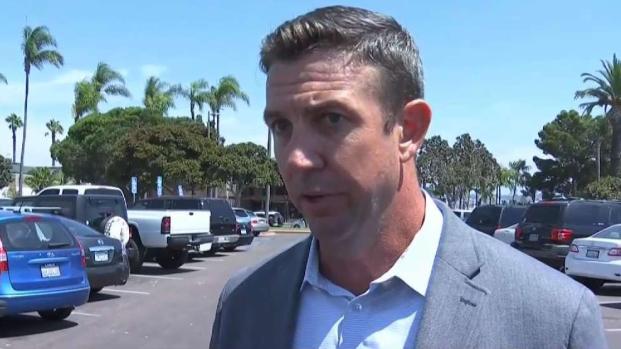 Hunter was reluctant to explain comments he made last week where he seemed to blame his wife his their indictment charges. NBC 7’s Bridget Naso spoke to the congressman.

Duncan Hunter and his attorney have maintained that the charges against him are politically motivated and that he looks forward to fighting the allegations in court.

He was among the earliest Republican members of Congress to endorse President Donald Trump and has in interviews compared himself to the president, saying “this is the new Department of Justice. This is the Democrats’ arm of law enforcement.”

“It will be good to expose the leftists that are in the U.S. right now that have brought all this on for political reasons,” Hunter reiterated, telling NBC 7 the charges against him are false.

Democratic candidate Campa-Najjar, a 29-year-old former Obama administration employee, is making his first run for Congress. He has made Hunter’s indictment a central issue in his campaign in the hopes of unseating the five-term congressman, a former Marine.

In the ad that started airing Monday — the third one his campaign has made focusing on the indictment — the narrator describes the charges and says of Hunter: “He’s so in it for himself, it’s criminal.”

Then the music changes, and Campa-Najjar is described as a hard-working, small businessman who once worked as a janitor in a church. It ends with him shaking the hand of a veteran in a cowboy hat.

Hunter has called the indictment by a grand jury a political witch hunt. His campaign did not respond to requests for comment on the new TV ad.

Margaret Hunter has yet to speak publicly about the charges.