Cleanup Tour Stop #1: Calling out the Koch Brothers at the Start of the Tax Debate 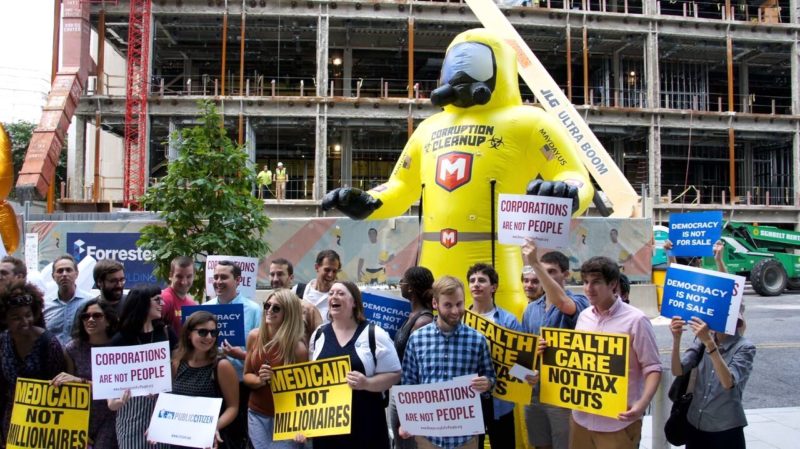 We can all agree that our political system is rigged; rigged against everyday Americans, whose voices are ignored in in favor of the nation’s wealthiest and corporations; rigged in favor of those with millions of dollars to spend on lobbying and campaign donations. This toxic sludge of corruption’s clogged up the pipes of democracy: Only the voices backed by money and access are getting through.

Cleanup Carl’s here to take on that toxic corruption by helping identify the biggest sources of toxic sludge. That’s why he’s traveling the country, identifying the worst offenders so we can clean them up.

So, when the Koch Brothers and the Trump Administration decided to team up on tax “reform,” it was the perfect storm for Carl to make his first appearance.

Yes, on July 31st, Republicans kicked off their tax grab by holding a public meeting – a summit, if you will – between White House policy aides and Tim Phillips, a direct lieutenant of the Koch Brothers and head of their dark-money political powerhouse Americans for Prosperity. They held it at the Newseum in downtown DC to give the summit an aura of respectability. But you and I both know there’s nothing dignified about representatives of the Kochs spending billions of dollars just to get a taxpayer-funded payoff.

Cleanup Carl, accompanied by five hazmat suit-wearing Cleanup Crew members, joined his friend the Tax March Chicken from Not One Penny and members of Public Citizen. Holding signs that said “corporations are not people” and “medicaid not millionaires,” Carl and his hazmat crew called out the collusion of legislators trying to pass a tax cut just for the billionaires who fund their political campaigns.

Suiting up with Carl’s Crew