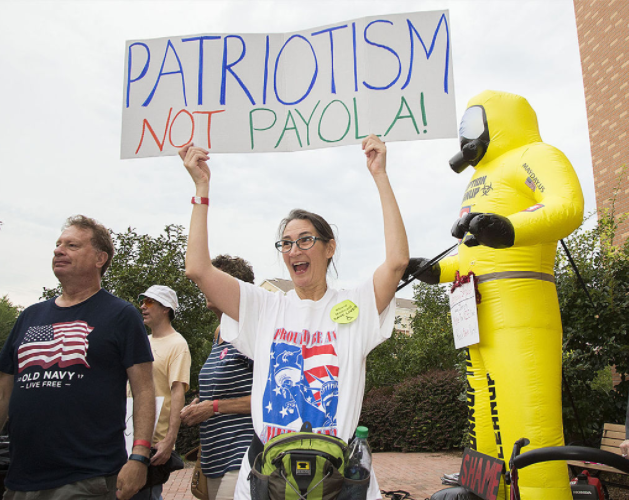 Hot off Carl’s official debut at Netroots Nation, he stayed in Georgia to meet up with local activists and clean up Senator Johnny Isakson at his town hall at Kenesaw State University.

Sen. Isakson’s been dodging his constituents – in the first seven months of 2017, he hadn’t held a town hall until yesterday’s event, denying citizens the opportunity to explain how awful the GOP’s plans for a donor-driven tax bill would be.

During a July hearing broadcast on C-SPAN, Isakson explained that instead of listening to ordinary people on tax reform, he’s getting his opinions from private dinners with corporate moguls instead. Cleanup Carl showed up to make sure that Isakson heard from the people who really matter.

Carl greeted a huge line of attendees as they entered the town hall. During the event, members of our Georgia Cleanup Crew demanded that Isakson work on behalf of regular Americans – not his campaign donors and corporate buddies.

As of this posting, Carl’s famous! Along with Georgia Cleanup Crew member Dana Bowers, Carl made the front page of the Marietta Daily Journal.

Isakson thinks it’s a good idea to get advice about corporate taxes at fancy dinners with big corporate executives. Carl says: Listen to the people of Georgia, not big donors!