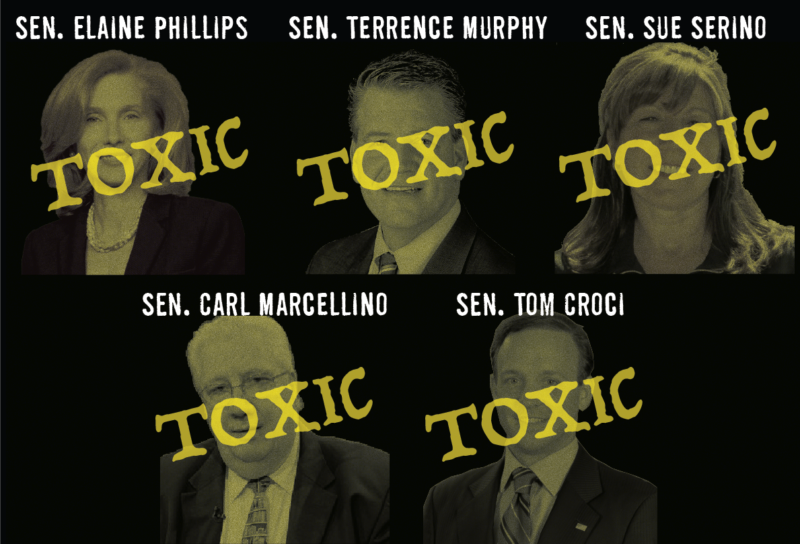 Last Friday, instead of passing a budget that provided funding for NY’s struggling schools, homeless shelters, and crumbling infrastructure, the GOP-controlled State Senate passed a budget that keeps open the carried interest tax loophole and makes the rich richer.

Why? It’s simple: The Wall Street hedge funds that power the Senate GOP’s re-election campaigns ordered a budget that keeps New York’s political system rigged towards themselves. And the Senate sold out their constituents by delivering it on a silver platter.

Let’s talk about what happened here. It’s important that voters in New York know what went down.

To review: the carried interest loophole is one of the biggest examples of structural corruption in politics. It’s an arcane provision that every year gives billions to the 1% of the 1% – big Wall Street hedge fund managers – who use it to pay a lower tax rate than teachers. That revenue could be going to schools, homeless shelters, infrastructure, you name it. But it goes to rich guys on Wall Street.

That cash flow’s not cheap to lock down – and that’s where the Senate comes in. Between 2014 and 2016, Wall Street hedge fund managers spent (through their super PAC, New Yorkers for a Balanced Albany) $8.3 million dollars to elect five key members of the State Senate: Elaine Phillips ($2.6 million), Terrence Murphy ($2.4 million), Sue Serino ($1.5 million), Carl Marcellino ($930K), and Tom Croci ($640K).

These Senators, along with others in the Senate, are the hedge funds’ insurance policy. Each year, when given the chance to reform NY’s political system by closing the carried interest loophole, these Senators balk. Normally, nobody blinks an eye. Albany politics as usual.

However, this year was different. After suffering the colossal big-donor sellout that was the GOP’s federal tax scam, voters and activists were determined to stop the big-money cycle in New York. For the first time in NY history, the Governor and the Assembly included closing the carried interest loophole in their budget.

But far more importantly, there was a full-fledged, grassroots groundswell from voters across the state to pass a budget that unrigged NY’s political system by closing the loophole.

Since GOP State Senators kept avoiding their constituents, we tried to corner them during budget negotiations in Albany.

But the hedge funds spent, and their paid-for politicians listened. So on Friday, the State Senate forced through a budget that keeps billions going to hedge funders who corrupt our political system – as opposed to the people who actually need it.

Up until now, we gave these Senators the benefit of the doubt. We told them each office visit, each rally, each protest, how they could clean up the toxic cash that’s clogging up NY’s democratic system. They could have decontaminated themselves by rejecting their donors’ big money and closing the carried interest loophole.

Since they didn’t, we’re calling them what they are: toxic for their voters, toxic for New York, and toxic for democracy.

When November comes, the people of New York aren’t going to forget who sold them out to their donors. Neither is Cleanup Carl.

Unfortunately, the hedge funds won’t either. I’ll bet you that come Election Day, they’re going to be spending more than they ever have to support Phillips, Murphy, Serino, Marcellino, and Croci.

In fact, their money-spewing spigot’s already back open. The next big state-level election is a special Senate race in Westchester to be held on April 24th. Just last week, reports emerged that New Yorkers for a Balanced Albany is spending $543,887 on TV and radio ads to support the Republican candidate, Julie Killian.

If Killian wins, you can bet those hedge fund owners and private equity bigwigs will want something in return.

Look out, Julie. These folks are sharks, and their money comes with big strings attached.

As for the voters? They’ve seen how that story ends.