A special Senate election is a referendum on the power of big money in politics and may well decide whether we the people – or billionaires – run the state. 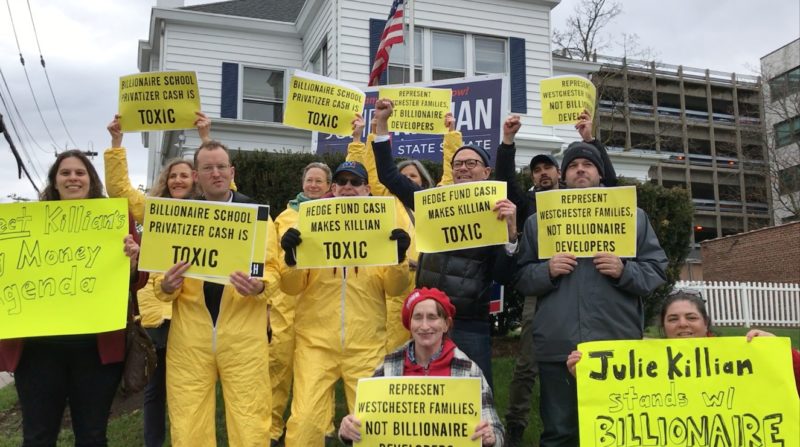 The money’s big – over $2 million – and so are the stakes. The election’s outcome today could determine the course of corporate power in the state for years to come.

In Westchester County, an affluent northern suburb of NYC, Republican Julie Killian and Democrat Shelly Mayer are vying to fill a vacancy in the NY State Senate.

The same billionaire donors and hedge funds that just bought themselves a preferential state budget are trying to do it again. In the last three months, three groups that represent the worst impulses in politics have poured money in to elect the Republican, Julie Killian.

That’s an insane amount of money. As we know, donors expect their money to buy influence, and these groups’ agendas are gentrification, corporate greed, and pay-to-play power.

We know that billionaires are always trying to use their money to buy elections. But why is this one so important?

Last month, billionaire donors won a huge victory: they compelled the GOP State Senate – whose election campaigns they funded – to deliver a state budget that gave the wealthy more money and political power at the expense of regular New Yorkers. Hedge funds got themselves tax breaks, charter school advocates got to cut public school funding,

It looked like the hedge funds had bought themselves power for another year.

But just this month, everything changed. Over a steak dinner in a (presumably smoke-filled) back room, Gov. Cuomo convinced the breakaway Independent Democratic Conference – a set of 8 Democrats who since 2010 have caucused with Republicans for politically and ethically dubious reasons – to rejoin the Democratic fold.

Now, if the Democrats win this seat in Westchester today, they’ll have majorities in both chambers. This will give them the newfound ability to pass progressive democracy reforms like closing tax loopholes on hedge funds and taxing millionaires fairly, expanding voting rights, and fully funding schools and hospitals.

These policies would go a long way to unrigging NY’s political and economic systems and making the state a real democracy for all.

For the same reason, they’d be disastrous for those who use their money to influence policy.

So, the hedge funds, real estate developers, and school privatizers are making a crazed grab for political survival, dumping millions into the race between Killian and Mayer and inundating residents with flyers, TV spots, radio ads, and negative polling.

This election’s no longer a humdrum local contest. It’s a battle for the heart of NY’s political and economic system.

Last week, we traveled with Cleanup Carl up to Julie Killian’s office in White Plains, NY to make sure everybody in Westchester knew the Waltons and hedge funds are paying for her campaign ads.

We braved wind and rain, obdurate city officials (who seemed intent on preventing our protest), and a threatened counter-protest by Killan (spoiler: she never showed up).

We were joined by an inspiring coalition of activists representing a wide array of Westchester residents. Activists from Indivisible Westchester, the New York State Nurses Association, NY State United Teachers, the Teamsters, and more pulled on hazmat suits. Speaker after speaker called out the corrupting cash and dangerous ideologies that are backing Killian – and why that makes her a toxic candidate.

Anthony Nicodemo, a public school teacher and basketball coach, laid out the transactional relationship between campaign money and policy. “Why in the world, are the Waltons, from Arkansas, donating so much money to this campaign. It’s very simple: they expect something in return. Nobody from Arkansas is going to give millions of dollars to someone in Westchester without looking for something in return.”

Bruce, a retired teacher and Indivisible Westchester activist explained how campaign cash from bad groups translates into policy agendas at odds with the beliefs of constitutents – using charter schools as an example.

“I’m a retired teacher in New York – where 90 something percent of the people send their kids to public schools – yet the Republican party continues to take money from charter school lobbyists, lobbyists intent on killing public schools! We don’t want that in Westchester county”

Finally, Charles Khan from the Strong Economy for All Coalition laid out the statewide stakes of this election. With ongoing crises of poverty, healthcare, and housing in New York, Westchester families “need someone who represents those who have the most to lose.” Is Julie Killian that person, Khan asked? The crowd roared its disapproval.

Samoa resting between sets of shredding on the guitar

We made a huge stir, drawing two local news teams and some positive (for us, negative for Killian) news coverage.

Hedge funds may have the money, but we’re winning the fight.

Letters to the editor and articles in Westchester’s major paper have highlighted the flood of money and decried Killian’s dangerous indebtedness to her big donors.

Today, Westchester residents have a choice: They could elect Killian and choose a candidate who will keep Albany contaminated by big donors’ toxic cash and working for billionaires.

But, if they don’t, New Yorkers can start to break the cycle of big money politics in Albany and bring New York closer to being a real democracy that works for us all.

Voters, the choice is yours: Billionaire money or corruption cleanup. Are you with us?