It’s become clear that the Supreme Court’s given up defending our vote. It’s now more important than ever we fight for voting rights ourselves. 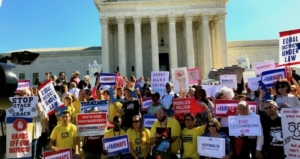 Last week, the Supreme Court had a big choice regarding gerrymandering: 1) rule this undemocratic scourge that’s destroying our politics unconstitutional and defend our fundamental democratic right; or 2) Do nothing.

The honorable justices chose the latter. We declared them complicit in the GOP’s voter-suppression schemes.

Well, if you didn’t believe us last week, we’ve got news for you: they just did it again.

In North Carolina – a state with gerrymandering so bad it got downgraded from a democracy in 2016 – they refused to act. It’s another “punt,” with disastrous consequences: North Carolina voters will be forced to use the state’s horrifically gerrymandered maps in the 2018 elections.

In the Texas case, Abbott v. Perez, lower courts had found that Republicans used extreme gerrymandering – in one case drawing a district that was 5 miles wide and 100 miles long – to “ensure anglo control” – a.k.a. disenfranchise Hispanic voters.

Today, the Court’s conservative majority went even further than they did last week. They ruled only one district “ an impermissible racial gerrymander” in a 5-4 partisan split. Apparently, the rest of the districts – 12 in total – are “permissable racial gerrymanders.” The ruling essentially endorses Texas’ racist voter suppression practices.

It seems like a sick joke that these decisions were released today. It’s the 5-year anniversary of Shelby County v. Holder, the case that eviscerated the Voting Rights Act and paved the way for the GOP’s now-rampant voter suppression tactics.

Shelby did for voter suppression what Citizens United did for money in politics: legalized it, encouraged it, and supercharged it. Happy anniversary!

Add today’s ruling to the Court’s decision two weeks ago that states can do suppressive purges of their voter rolls, and the preponderance of evidence rises to a clear conclusion: The Supreme Court does not seem to have much interest in protecting your right to vote. At all, really.

In advance of an upcoming national election, the Supreme Court has continued to give the green light to vote suppressors, gerrymanderers, and racist and corrupt practices that disenfranchise millions of voters.

So, what the heck can we do?

When it comes to massive constitutional issues, you’ve got two options. The first is wait for the Supreme Court to issue a big, nation-altering decision that swings in your favor. Based on this past week’s decisions, climate change will probably put your house underwater first. (Waiting on a conservative Congress to restore the Voting Rights Act is just as likely)

There’s a second option: Fight back! 9 unelected Harvard and Yale grads in funny robes aren’t going to do this for us – but we can fix democracy ourselves.

There’s a clear response to voter suppression: protect and expand the right to vote.

Automatic Voter Registration, which registers someone to vote whenever they interact with a government agency like the DMV, has effectively registered hundreds of thousands of voters in low-income areas more likely to be suppressed. Same-day registration and early voting similarly increase turnout and decrease barriers to vote. Taken together, these reforms could bring in millions more voters – and stymie suppression attempts.

The first thing you can do: Vote on these issues in November. Most of the mechanisms of voter suppression – gerrymandering, voter ID, closing of polling locations, voter purges – are manufactured on the state and local level, where your vote counts most, and where most voters aren’t paying attention.

Some would note that the mechanics of democracy are far from sexy (what, election statues don’t get you excited?). However, if state legislators start feeling the pressure from constituents on these issues, we can make voting rights and democracy  Find out where your state legislators stand on pro-voter policies, and then push them aggressively on it.

The tactic is working: after a groundswell of support this year, 13 states and counting have automatic voter registration. Same-day registration is being used in 10 states. That’s all thanks to voters and activists who shook usually-complacent state lawmakers out of their complacency.

It’s not nearly as flashy or as immediate as a bombshell Supreme Court ruling, but focus on voting rights at the ground up is proving a hell of a lot more effective these days.

If you’re voting in an extremely gerrymandered district? First off, sorry about that (though the Supreme Court’s not). Second, as we said last week, there are ways to fight back – with legislation, with ballot initiatives, and civil disobedience, that can help you regain your agency as a citizen and fight corrupt map-drawers.

To their credit, the Court’s liberal minority came out very strong in its condemnation of racial gerrymandering, eloquently argued by Justice Sotomayor. Airing of personal grievances against individual judges, should you choose to indulge, ought be directed at the conservative majority which was responsible for Citizens United, Shelby, and today’s Abbot v. Perez: Justices Roberts, Alito, Thomas, Kennedy, and Scalia/Gorsuch.

However, the more powerful – if less satisfying – takeaway is that the Court as an institution is unwilling and unable to defend our vote. That job’s up to us.

The Supreme Court’s not going to save democracy. In truth, it continues to enable some of the the most corrupt and racist tendencies of voter suppressors everywhere.

But if we make these upcoming elections about fixing up our contaminated political system, we can make the Court’s complicity irrelevant.