By refusing to rule on partisan gerrymandering, the Supreme Court is now actively complicit in the GOP’s scheme to disenfranchise millions. 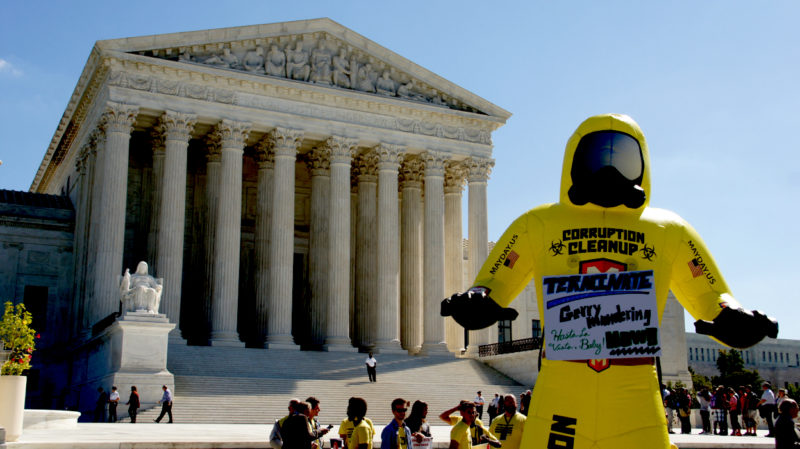 Yesterday, the August body charged with delineating and defending our constitutional rights had the power and the opportunity to completely end partisan gerrymandering forever.

So of course, they didn’t.

Instead, the Justices ducked their weighty responsibility and voted 7-2 to send the case back to a lower court on a technicality. News organizations, politicians, and activist groups alike described it as a “punt.” But that’s far too generous

Imagine you’re watching the 2nd inning of a baseball game on TV – and a fire breaks out in your kitchen. What if, instead of grabbing the fire extinguisher to put it out, you reach for the popcorn and say, “I’ll deal with it when the game’s over.”

By the 9th inning, you, your popcorn, and your house will all be burnt to a crisp.

For nearly a decade, extreme partisan gerrymandering has been burning its way through Wisconsin, Maryland, Pennsylvania, Texas, North Carolina, Ohio, to name a few. By conservative estimates, millions have been voting in districts that deprive them of a free and fair choice.

There are few in either party who don’t agree that gerrymandering a political crisis. It’s widely agreed that gerrymandering makes politicians unresponsive; voters poorer and less healthy; and Congress incomparably dysfunctional and undemocratic. Even the Supreme Court agrees – in a 2015 opinion the Justices declared “partisan gerrymandering is incompatible with democratic principles.

In the face of all of that, yesterday the Supreme Court examined the fire, had their hands on the fire extinguisher – and then said: “nah.”

America is barreling towards another set of elections in less than 5 months. Now, thanks to the Court’s shrug, these elections will yet again be decided under fundamentally unfair and corrupt conditions.

By refusing to do the right thing, the Supreme Court is now complicit in a terrible, partisan scheme to deny fair and free elections to millions of voters.

Some political prognosticators are pointing to a silver lining: The Supreme Court didn’t endorse gerrymandering – and the case can come back to the court later.

Sure. Four of the Court’s justices, in a concurring opinion written by Justice Kagan, demonstrated at least a shred of concern for the immediate health of our democracy by accepting that gerrymandering is “degrading our nation’s democracy.” Kagan’s opinion laid out a road map for the court to finally end gerrymandering – sometime in the future.

But that might not happen for years. That fire’s still burning – and while constitutional litigators and justices might have the time to wait, regular voters don’t.

By asking America to wait, the Supreme Court has jumped down into the trenches and thrown in their lot in with a continuing voter suppression scheme that’s destroying our democracy.

It shouldn’t come as a surprise from the same Court that brought us Citizens United, the most disastrous ruling for democracy in the past century.

Kagan’s concurring opinion misstepped elsewhere. She said “only the courts can do anything to remedy the problem.” That’s also not true.

It’s clear that neither the Courts or politicians have the political will to do what’s necessary to end this voter suppression scheme. But the people do.

In states around the country, activists are leading the charge to strip the power to draw electoral lines away from politicians who continue to abuse that power and put it into independent redistricting commissions that are non-partisan and free from political interference.

Our friends at March on Harrisburg have been building citizen power and using dramatic civil disobedience to force votes on independent redistricting bills in Pennsylvania. In Ohio, voters just passed a ballot initiative to restrict the power of parties in the redistricting process with 75% support. In Michigan, Voters Not Politicians are close to getting a redistricting reform bill on the November ballot.

In the face of a decades-long scheme to allow politicians to choose their voters, that‘s what effective resistance against gerrymandering’s antidemocratic blaze looks like.

Yesterday, all the Supreme Court had to offer was complicity.