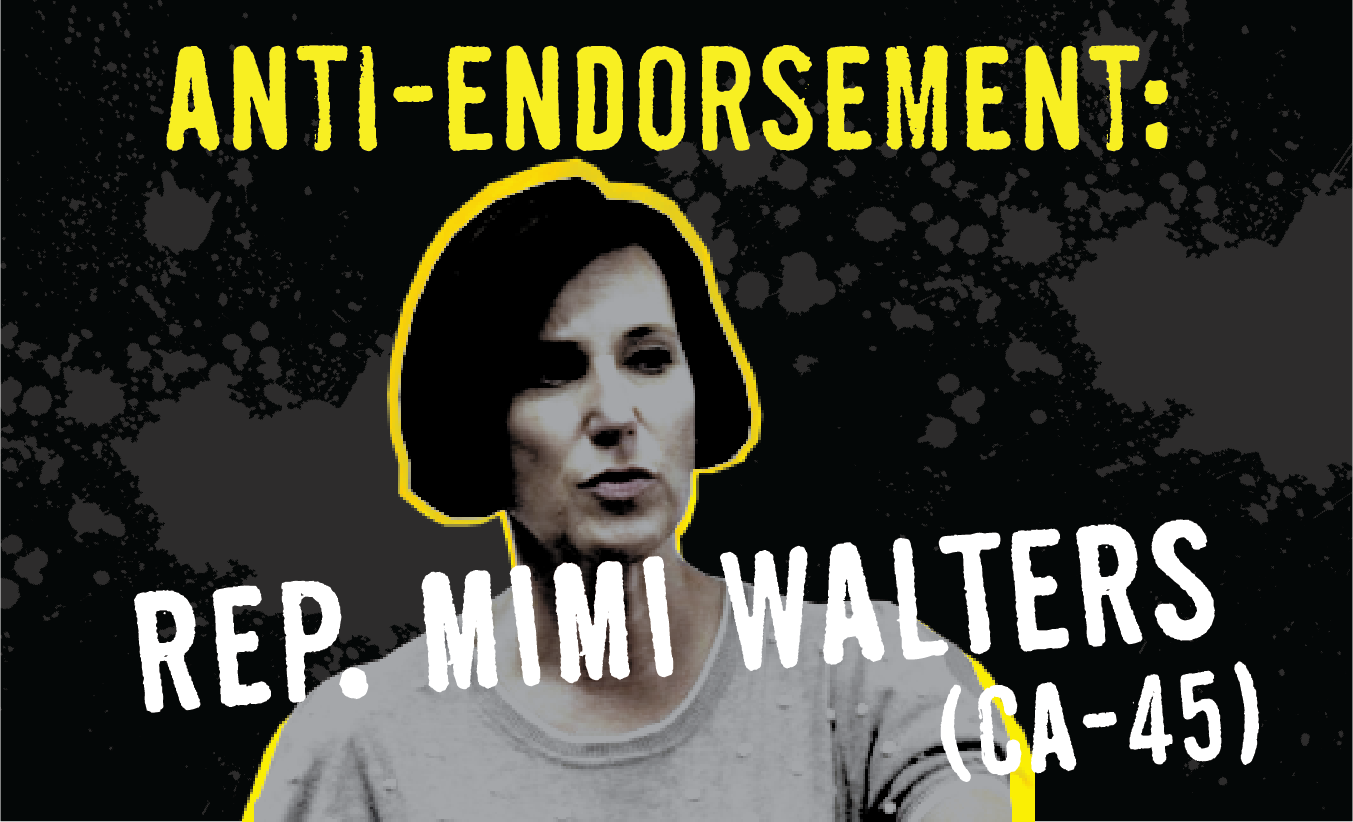 Wall Street and Southern California are about as far apart as you could get. But for one CA Congresswoman, they might as well be right next door.

Rep. Mimi Walters (CA-45) presents a local and attentive image – but underneath that facade is a politician who has repeatedly sold out her voters in Orange County, CA to her donors across the country on Wall Street.

Walters’ big money habit started early. Before a career in Southern California politics, Walters cut her teeth at Drexel Burnham Lambert, an investment bank that literally created the titans of modern Wall Street – before it collapsed due to massive fraud on the part of its head investor.

While Walters may have left Drexel’s toxic legacy behind, it’s clear that the lessons she learned in that pressure-cooker of greed – putting money before people – have driven her career in Congress. Time and time again, she’s voted in service of billionaire donors and Wall Street executives who share her old profession, and at the expense of her voters.

This summer, she voted to deregulate the banks that crashed the economy in 2008. Last December, she voted for the GOP Tax Scam, which gave billions away to bankers and hedge funders, while raising taxes on middle-class Californians. She’s voted to make it easier for corporations to spend secretly on elections, and opposed an amendment to end Citizens United.

It’s clear her old banking friends haven’t forgotten her, either! For her efforts, Walters has taken $2,404,898 from corporate-funded PACs, over a million of it coming from Wall Street.

And that’s not all. Mimi Walters is taking money from Wall Street interests that are directly hurting her own constituents.

Wall Street billionaire Steven Schwarzman (a Trump megadonor and villanously wealthy man) has been leading efforts to corporatize housing in Southern California through his company, Blackstone. Blackstone’s slumlord rental policies are eviscerating affordable housing in LA and Orange Counties, terrorizing residents – some of whom are Mimi Walters’ voters.

But that’s just fine with Walters, whose GOP tax scam gave men like Schwarzman billions of dollars. In exchange, Schwarzman donated the federal maximum to her campaign.

Finally, if you need any more evidence who Walters is working for, take a close look at who’s funding her re-election campaign this time around.

The Congressional Leadership Fund, which swelled with a $30 million check from Sheldon Adelson in May, set up a field office in her district 10 months before the election and reserved $2.3 million in ads on her behalf. So has the NRCC, a conservative super PAC that’s funded almost exclusively by billionaires and corporate donors,

It’s clear that Walters has been doing work of the rich people who fund her campaigns instead of protecting the livelihoods of her voters. For this sterling record, we’re proud to give her a coveted anti-endorsement!

We’re targeting Mimi Walters as part of our Clean The House 2018 Tour, a national campaign to expose the collusion between the 183 GOP representatives who voted for the tax scam in exchange for a payoff from their billionaire donors. We’re traveling the country to take on the most corrupt of those Reps. this fall. The tour stops in Mimi Walters’ district on September 20th.