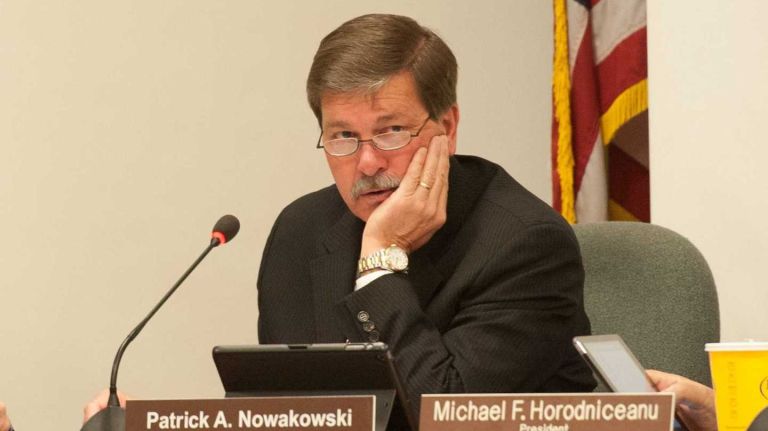 There are a bunch of guys named Carl in New York politics, but Long Island met a new one Thursday: Cleanup Carl, a 12-foot humanoid balloon that is part of an ongoing protest over the influence of money in politics.

The balloon was joined by hazmat-suited activists and a punk rock guitarist who are touring the state, visiting GOP state senators who they say are the top five state legislators receiving support from hedge fund donors.

On Thursday, the balloon visited State Sen. Carl Marcellino’s office in Oyster Bay, with a date at Sen. Elaine Phillips’ Mineola office in the afternoon. (The other top recipients were Sens. Tom Croci of Sayville; Terence Murphy, who represents the Hudson Valley; and Sue Serino, who was visited at her office in Hyde Park.)

The main handlers of Cleanup Carl are the Communications Workers of America; the Hedge Clippers campaign, which focuses on money in politics and which crunched the donor numbers; and Mayday America. Mayday was first formed as a PAC by Harvard Professor Larry Lessig to support candidates nationwide, with mixed results.

In a statement, Phillips did not address the loophole, but said she stands “ready to work to ensure” that issues like dark money and adherence to campaign finance laws are addressed.

Marcellino’s office did not respond to request for comment about Carl on Carl.