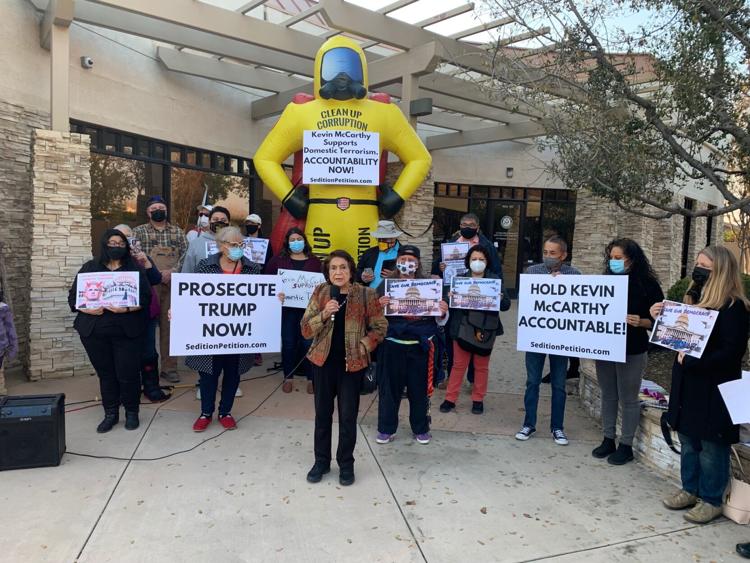 On Jan. 6, 2021, thousands of supporters of then-President Donald Trump swarmed the U.S. Capitol in an attempt to stop the certification of the Electoral College vote. Many were injured and five people died, including a police officer who suffered a stroke the day after the incident.

A year later, a group of about two dozen activists held a protest and vigil in front of the Bakersfield office of Rep. Kevin McCarthy, R-Bakersfield. Organized by the Dolores Huerta Foundation, the protest was meant to demand accountability for what they see as McCarthy’s role in the Jan. 6 attack.

“Kevin McCarthy has been supporting Donald Trump — Donald Trump, who led the insurrection against our United States of America,” Dolores Huerta said during the protest. “This is a threat to our democracy.”

The former president’s role in the Jan. 6 riot has been hotly debated since the event itself. Following the election, he stirred distrust in the electoral process by claiming voter fraud, which has been widely debunked by numerous investigations conducted by multiple states. On the day of the unrest, he held a rally in Washington, D.C., in which he called on Vice President Mike Pence to overturn the election result.

The House of Representatives has formed an investigative committee to look into the causes of the Capitol attack. Initially, the committee was meant to be a bipartisan affair, but McCarthy pulled Republican involvement after Speaker Nancy Pelosi refused to seat two of McCarthy’s choices, Reps. Jim Jordan, R-Ohio, and Jim Banks, R-Indiana.

Two Republicans who voted to impeach Trump now sit on the committee along with seven Democrats.

McCarthy now says the Select Committee to Investigate the Jan. 6th Attack on the United States Capitol has become a tool to further divide the nation.

When asked by The Californian for a comment on the protest in front of his office, a representative for McCarthy emailed the newspaper an excerpt from an open letter from McCarthy to fellow House Republicans on Jan. 2.

“As we have said from the start, the actions of that day were lawless and as wrong as wrong can be. Our Capitol should never be compromised and those who broke the law deserve to face legal repercussions and full accountability,” the letter stated. “Unfortunately, one year later, the majority party seems no closer to answering the central question of how the Capitol was left so unprepared and what must be done to ensure it never happens again. Instead, they are using it as a partisan political weapon to further divide our country.”

But protesters in front of his office demanded McCarthy comply with the committee.

The Sedition Petition brought an inflatable superhero in a hazmat suit named “Clean Up Carl” to the rally to illustrate their point.

Following a press conference, attendees held a vigil to commemorate those who died during the attack.