Activists outside Indian Harbor Yacht Club on Thursday chanted phrases including “pay your fair share” and “tax the rich.” Carlos Moreno of the Working Families Party urged protestors to reach out to their legislators.

Despite drizzle and then rain, a group of protesters organized by the Working Families Party gathered on Steamboat Road across the street from Indian Harbor Yacht Club where the Connecticut Hedge Fund Association held its quarterly meeting on Thursday evening. 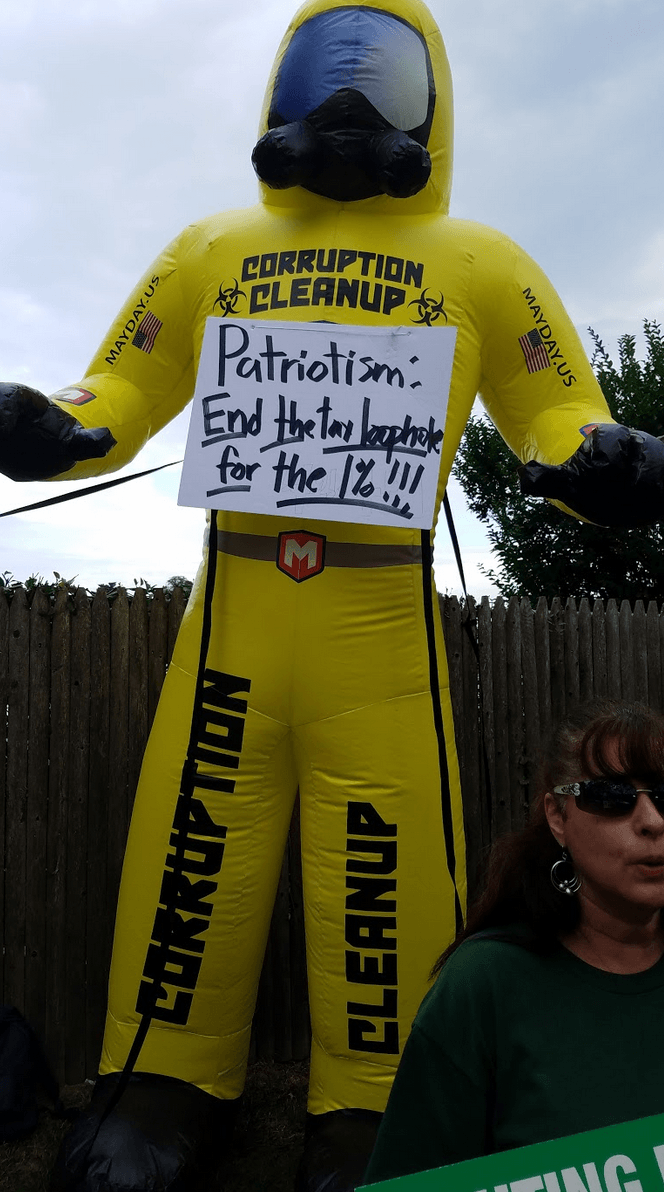 The protesters, with a large inflatable likeness of “Clean Up Carl,” a man in a toxic cleanup jumpsuit, with a sign, “Patriotism: End the tax loophole for the 1%,” said they came to Greenwich to object to actions by high net worth individuals and urge a fix for the state’s budget by making the rich pay more of their share.

“If the CT General Assembly refuses to make the wealthy pay their fair share, the state will be harmed by more cuts to schools and hospitals and more regressive taxes on working families,” said a spokesperson for the Working Families Party. “Connecticut has more millionaires and billionaires than ever, and they must be part of the solution.” 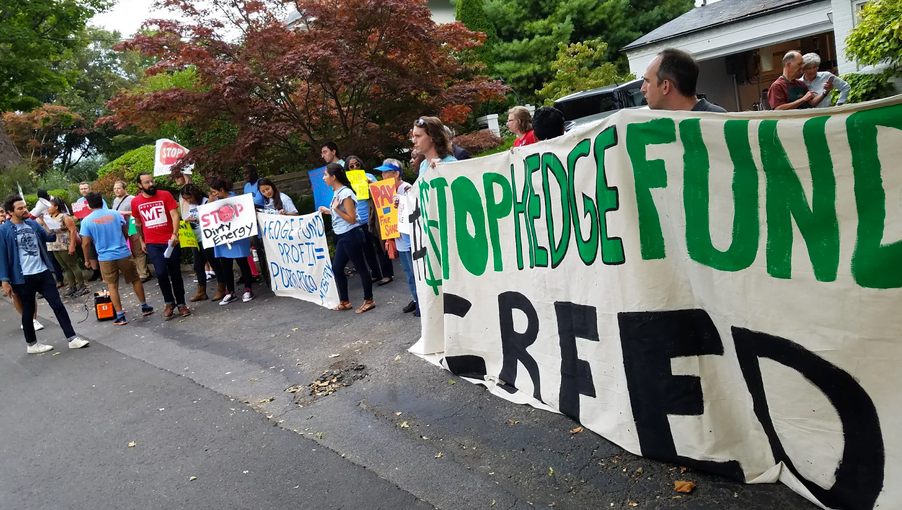 Demonstrators rallied across from the Indian Harbor Yacht Club around dinner time on Sept 14.

Organizers of the protest said Connecticut is over-reliant on finance, and needs revenue to close its deficit and invest in a diversified economy.

The pointed out that income is taxed at a rate of up to 39.6%, but the loophole gives a 19.6% discount. Further they argue that labeling fees as capital gains is unfair, because, “financiers generally earn their fees by managing other people’s money, not by investing their own or assuming any of the risk that actual investors take.”

Legislation to close the tax loophole was introduced this year but rejected by Governor Malloy and Democrats, though those pushing for it said it could have raised $535 million a year.

In Greenwich, officials have pointed to an exodus of hedge fund types who simply depart Connecticut for states including Florida where they are less heavily taxed.

Among those departing Connecticut for Florida was real estate investor Barry Sternlicht, chairman and CEO Starwood Capital Group, who infamously told Bloomberg news in 2016, “You can’t give away a house in Greenwich.” 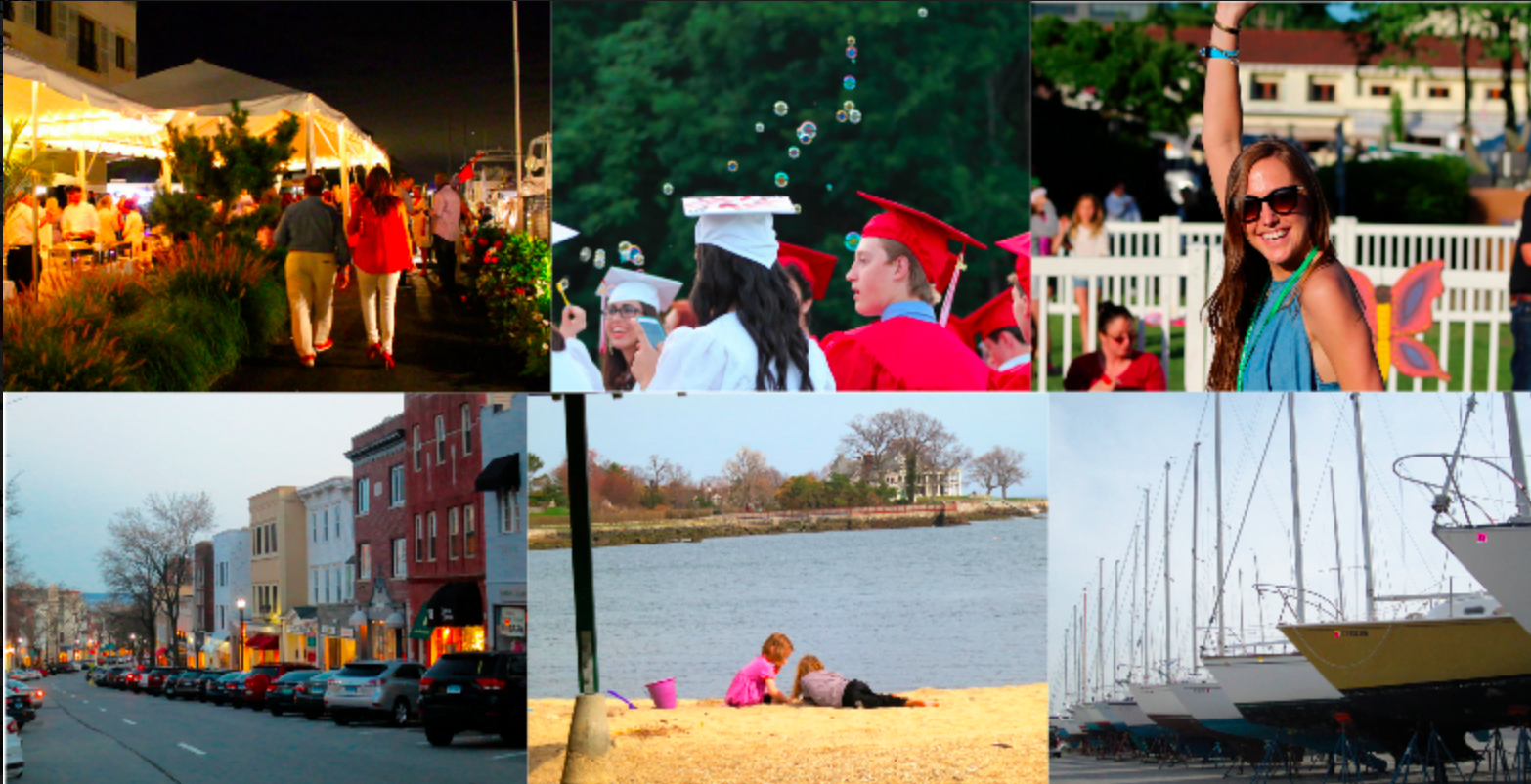 A re-branding of Greenwich is intended to show off Greenwich’s assets including beautiful parks, beaches and harbor; events like the Greenwich Town Party, a vibrant downtown and great schools. Collage: Leslie Yager

Sternlicht’s comment was the touchstone for a move to “re-brand” Greenwich initiated within the Economic Advisory Committee and championed by First Selectman Peter Tesei.

In a narrow vote of the RTM, Greenwich agreed to fund $30,000 toward a public relations campaign and hired PR firm Lou Hammond Group after a search. Leaders of the Economic Advisory Committee said that beyond Sternlicht’s comment, Greenwich has unfairly garnered a “pearls and Mercedes” image and is far from stodgy.

In addition to the $30,000 of taxpayer money, organizers raised $90,000 in private donations for the PR campaign. 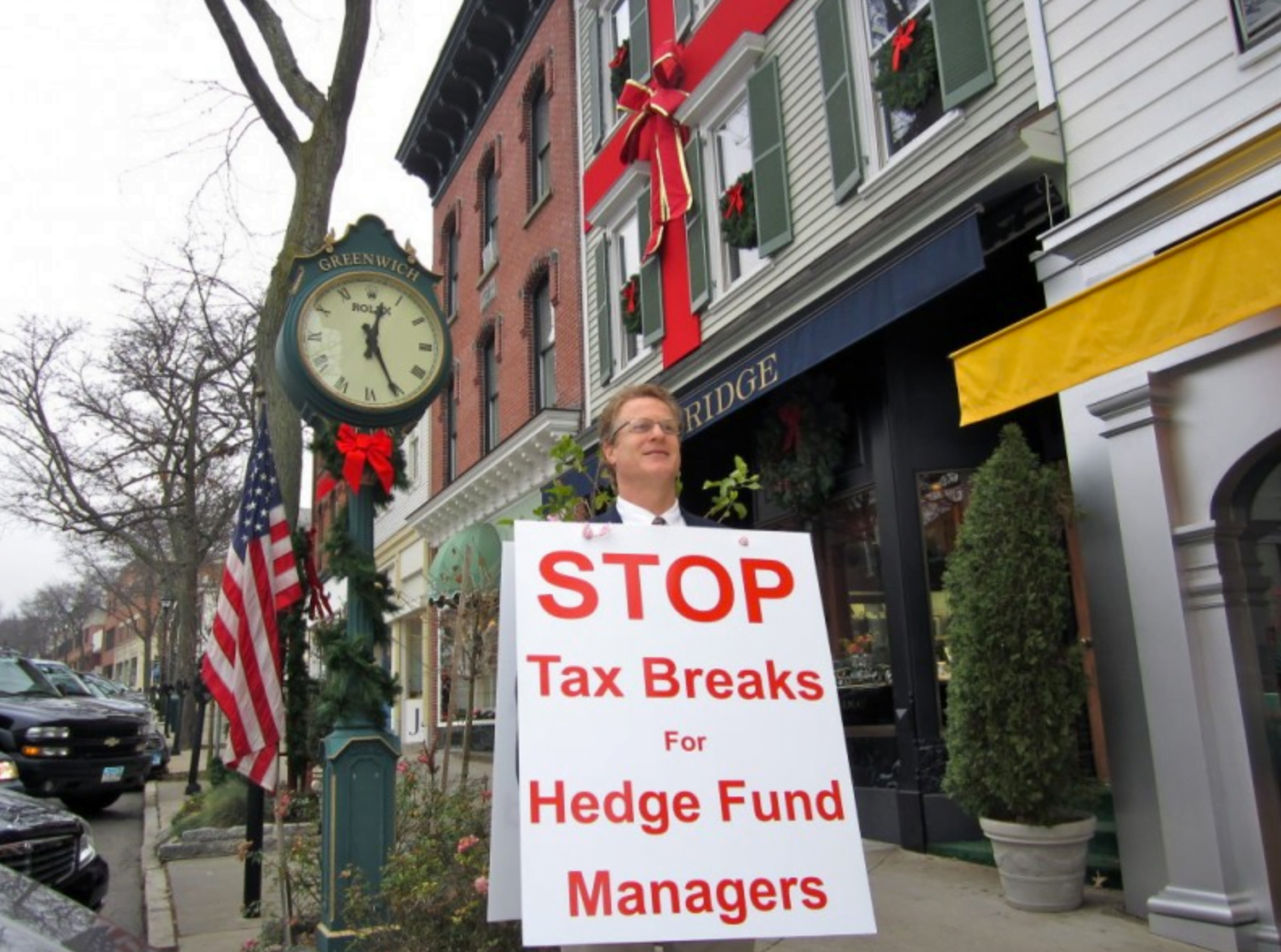 “People can be making a billion dollars a year and pay a tax rate slightly more than half of the rate paid by a police officer, clergy person, school teacher, nurse or auto worker,” said Daniel Barach in 2011. “And less than half the rate of an engineer, doctor or lawyer.” December 2011, Photo: Leslie Yager

Thursday’s protest was not the first of its kind.

Back in 2011 Daniel Barach walked up and down Greenwich Avenue Avenue at lunch time with a sandwich board that read: “Stop Tax Break For Hedge Fund Managers.  Barach, a former hedge fund portfolio manager with an MBA from Harvard, objected to the special loophole.

“People can be making a billion dollars a year and pay a tax rate slightly more than half of the rate paid by a police officer, clergy person, school teacher, nurse or auto worker,” said Barach. “And less than half the rate of an engineer, doctor or lawyer.”

In 2015, bus loads of protesters arrived at Belle Haven and walked in the pouring rain to the home of Paul Tudor Jones to voice their objection to what they said was a rigged tax structure that has exacerbated income inequality and altered the political landscape in New York. “The hedge funds are inequality on steroids,” one protestor said.