Scenes From the Trump Demonstrations at House Republican Retreat

Protesters and supporters gather in Harbor East ahead of president’s arrival Thursday. 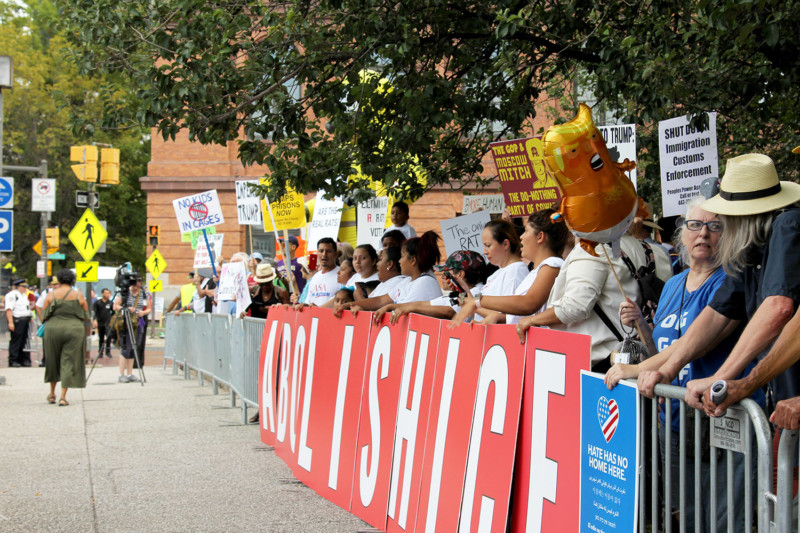 Less than seven weeks ago, President Donald Trump tweeted to his millions of followers and constituents that U.S. Representative Elijah Cummings’ district—which includes much of Baltimore and its surrounding counties—is “a disgusting, rat and rodent infested mess” as well as a “very dangerous & filthy place.” This evening, the 45th president walked straight into the proverbial rat’s nest, as hundreds of people gathered around Harbor East ahead of his arrival to the House Republican Conference at the Baltimore Marriott Waterfront Hotel. Here’s what some of the demonstrators had to say about the visit. 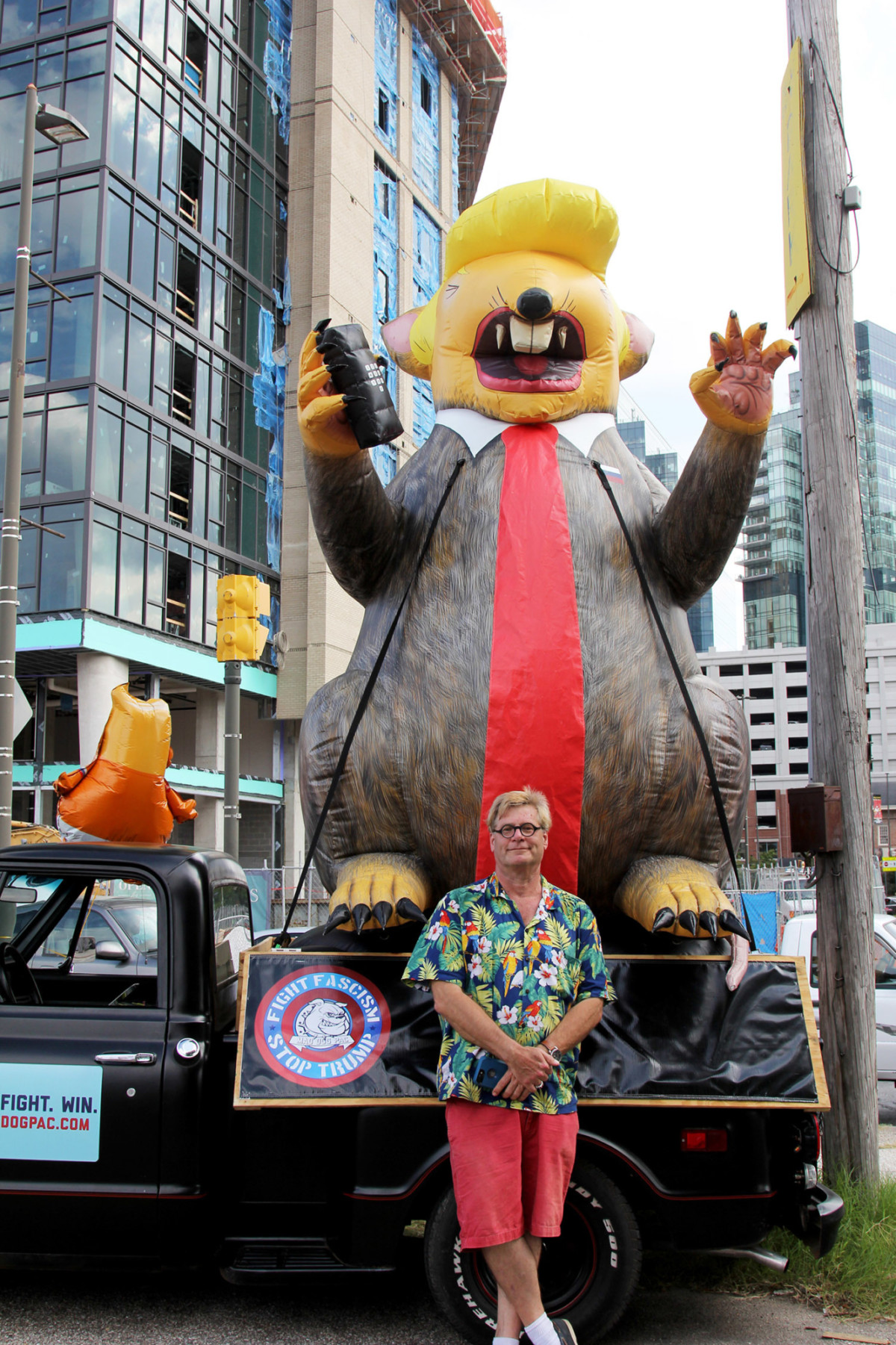 I started a political action committee, and principally what we do is anti-GOP and anti-Trump billboards. And we also do the rat. We’ve had this rat for over a year, and deployed it in several states. It’s been at the White House and Trump Hotel—we took it to Mar-a-Lago. Sometimes it’s a rat truck, sometimes it’s a rat boat, but it’s always Trump rat. It’s ironic because we created it almost a year before [Trump’s statements about Baltimore.] But, that’s Trump. The rat is the perfect message. 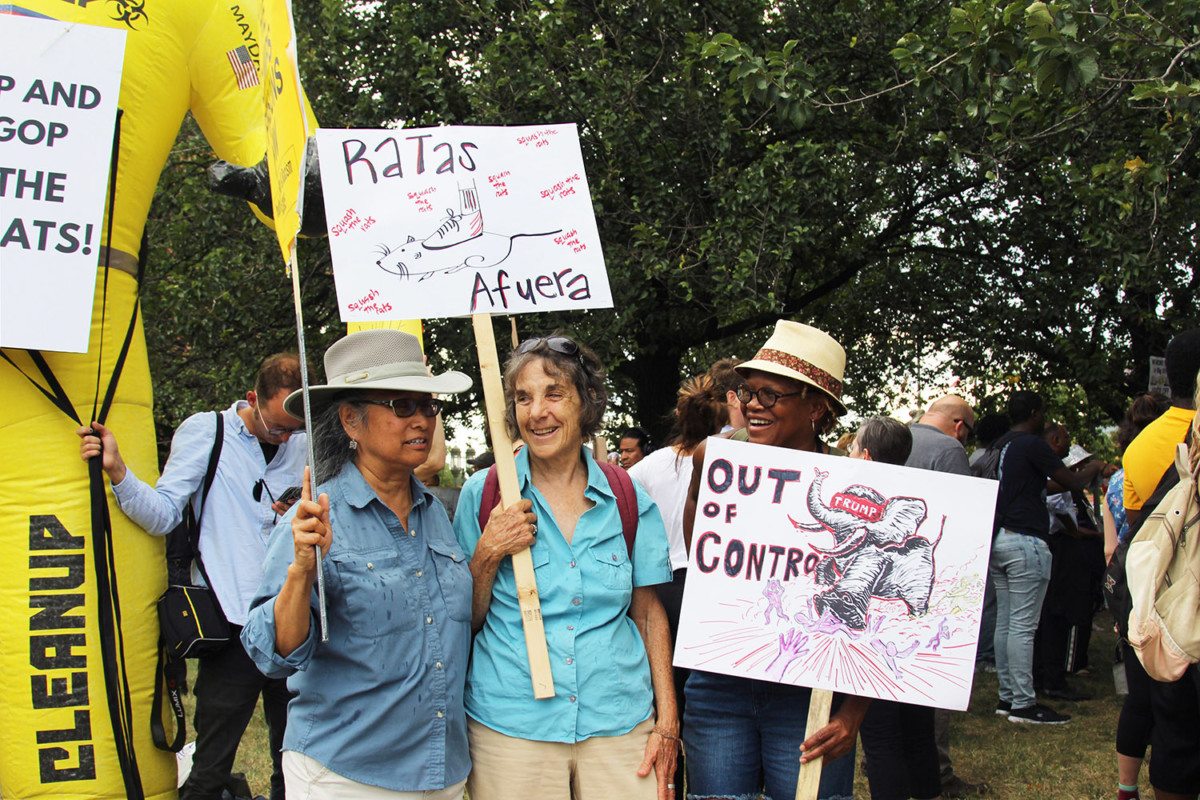 Astin: We’re here basically to let Trump know that we don’t agree with his policies, and we don’t agree with what he has said about our city. You look at this crowd, and there’s a mixture of every color and race and age. We have to be out here to show the fact that we’re united. As a city and as people.

Carlisle: We have to show them that it’s not okay. Not in our name. He doesn’t listen, so I don’t think he cares [about the protests.] I’m doing this for me and my grandchildren. I have to stand for what I believe even if it’s not going to make any difference today. And I will be registering voters and going to other states to do so. 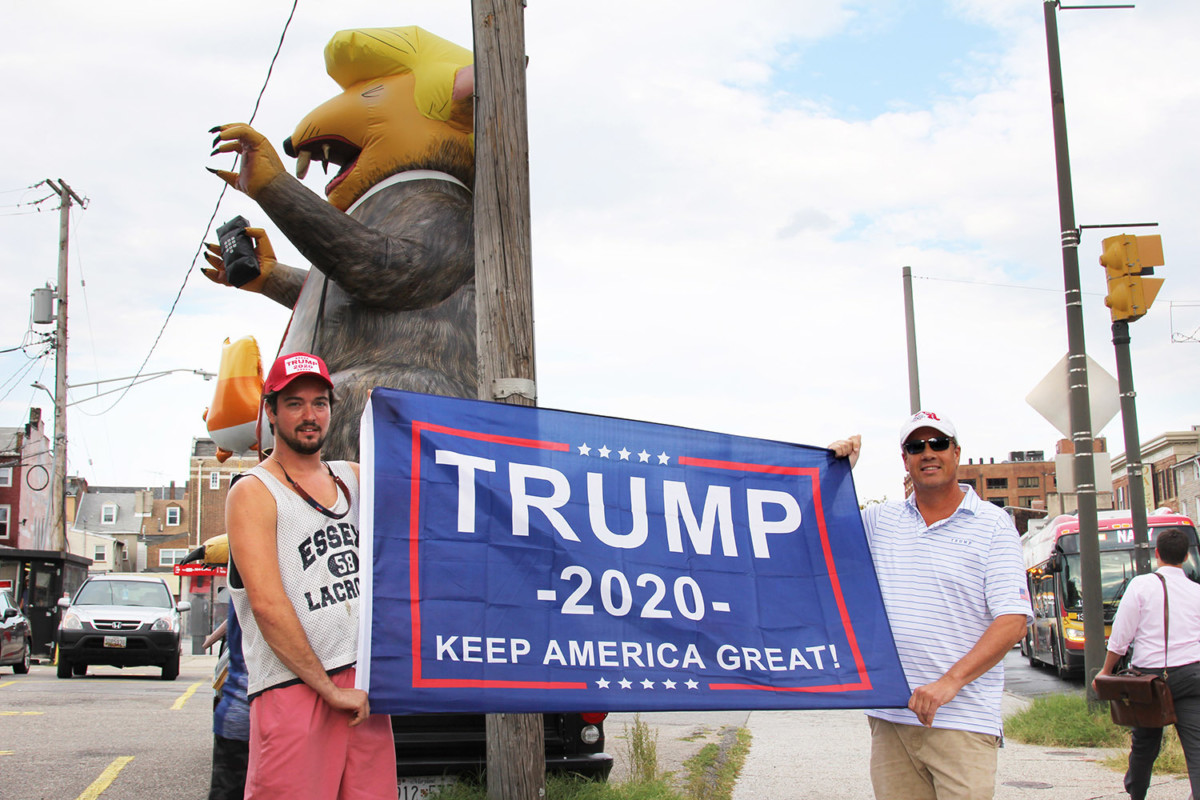 I’m here to see the President of the United States come to Baltimore City. I’ve been here my whole life, and now my president’s finally coming. He opened up opportunity zones which is why he’s here today, so he can actually rebuild the worst parts of our city and make them nice again. His four tweets [about Baltimore] have cleaned our city up tremendously. 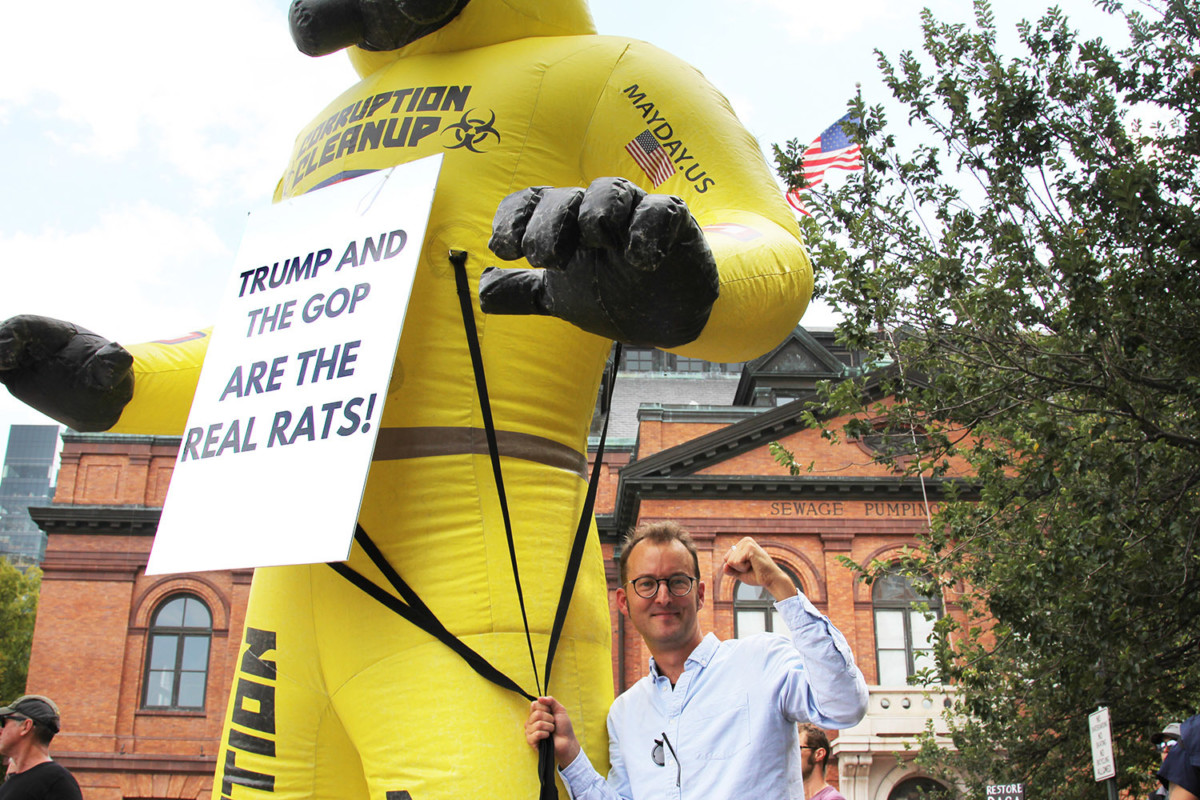 This is Cleanup Carl. He’s a superhero for democracy who is on a national tour to call out all of the country’s biggest corruptors, and there’s no bigger corruptors than Trump and GOP members of Congress. I think it’s so offensive that Trump thinks that he can tell people about Baltimore when he doesn’t know anything about this city. Baltimore has its fair share of problems, just like any city does. Baltimore is a beautiful, diverse city with so many wonderful neighborhoods and so many beautiful people and Trump doesn’t know anything about that. There’s no place for racism from Trump and the GOP in Baltimore City or anywhere else. 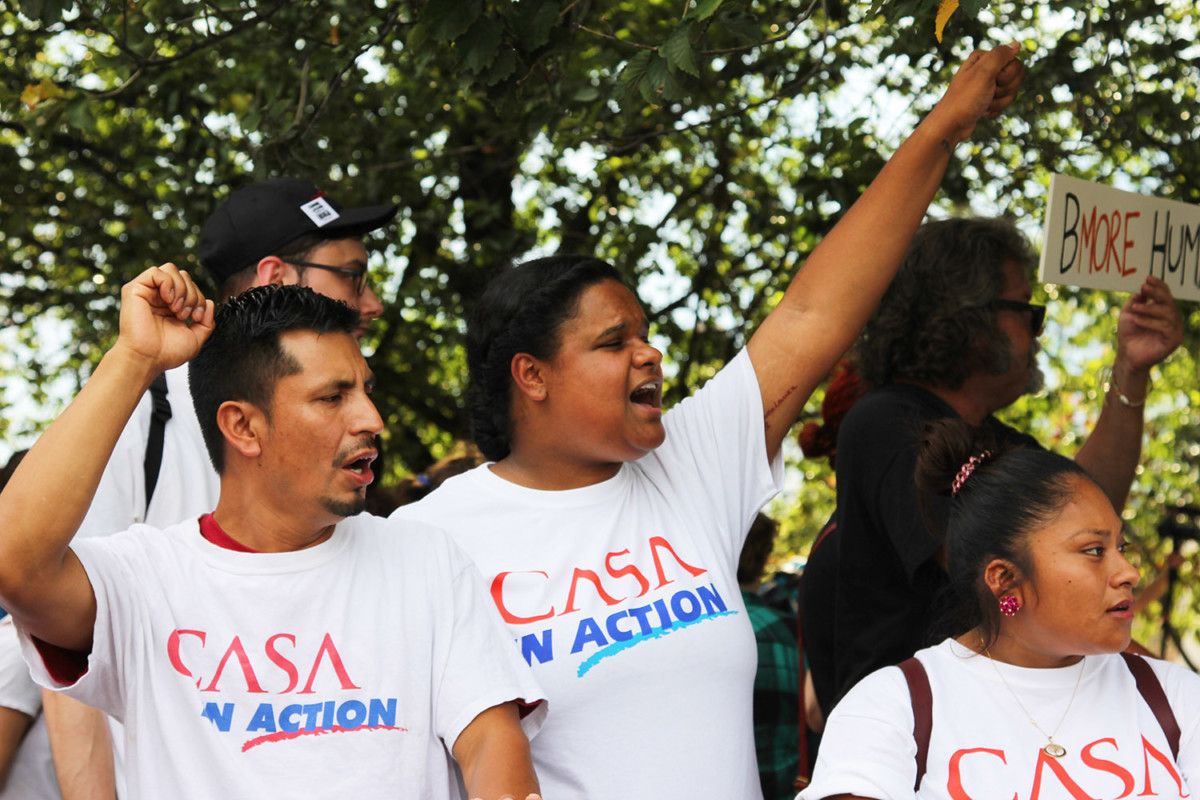 Baltimore Regional Director of CASA in Action in Maryland

Many of our members recognize Baltimore City as their home. Many of them have been living here, on average, for about 15 years and they are tired of the inhumane treatment from this administration and the continued bullying. So we’re out here today with a big sign that says, “Abolish ICE” to remind the administration that this is the time to ensure that our voices are heard. I think it’s important that the president continues to see that immigrant community members are united with so many hundreds of allies behind us. We’re letting him know that this is our city, and his continued threats and attacks of panic will not defeat us here in Baltimore. 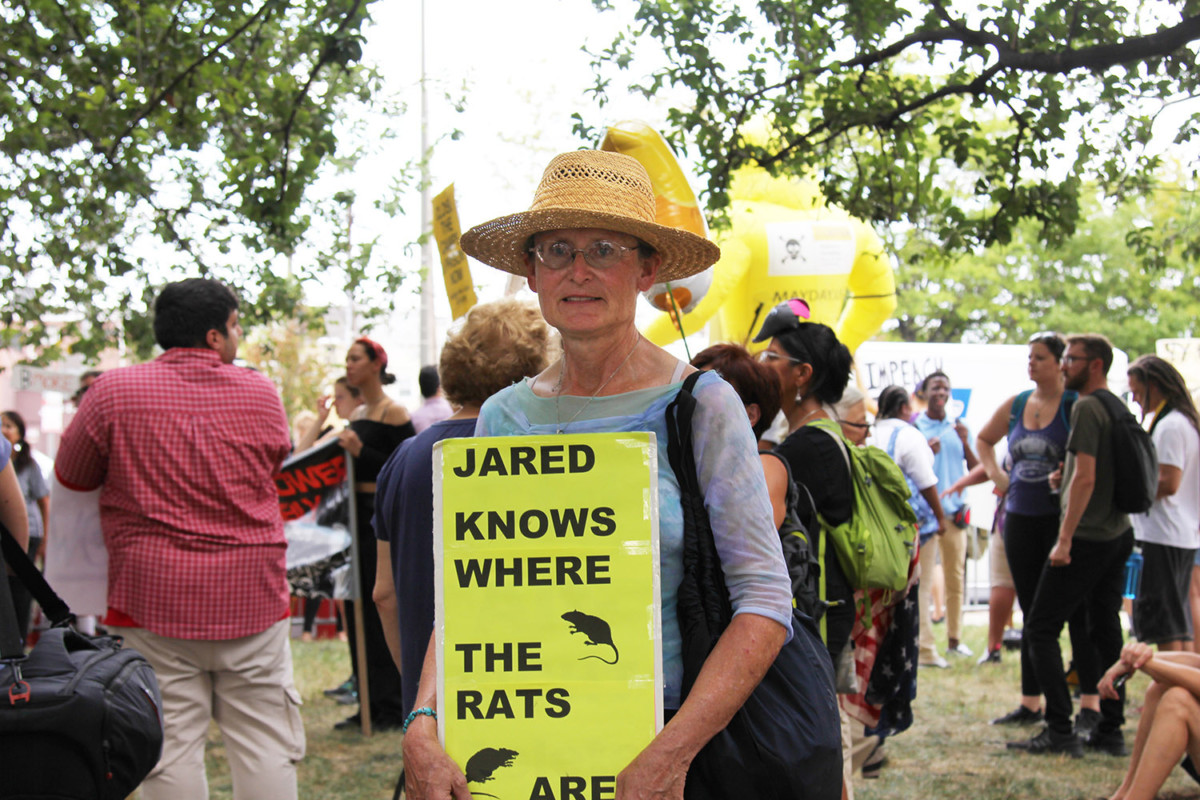 I’ve been doing almost weekly protests against the Trump administration since he became president. One of my bucket list items was to come and protest when Donald Trump is in the area. I did the Women’s March, too, in Washington, D.C., which was fabulous. It was one of the top experiences of my life. I know he was in the White House then, but today is a little more personal. I want to show my solidarity and show that Baltimore is strong and we’ll always stand up to Trump’s policies, no matter what he says about us. 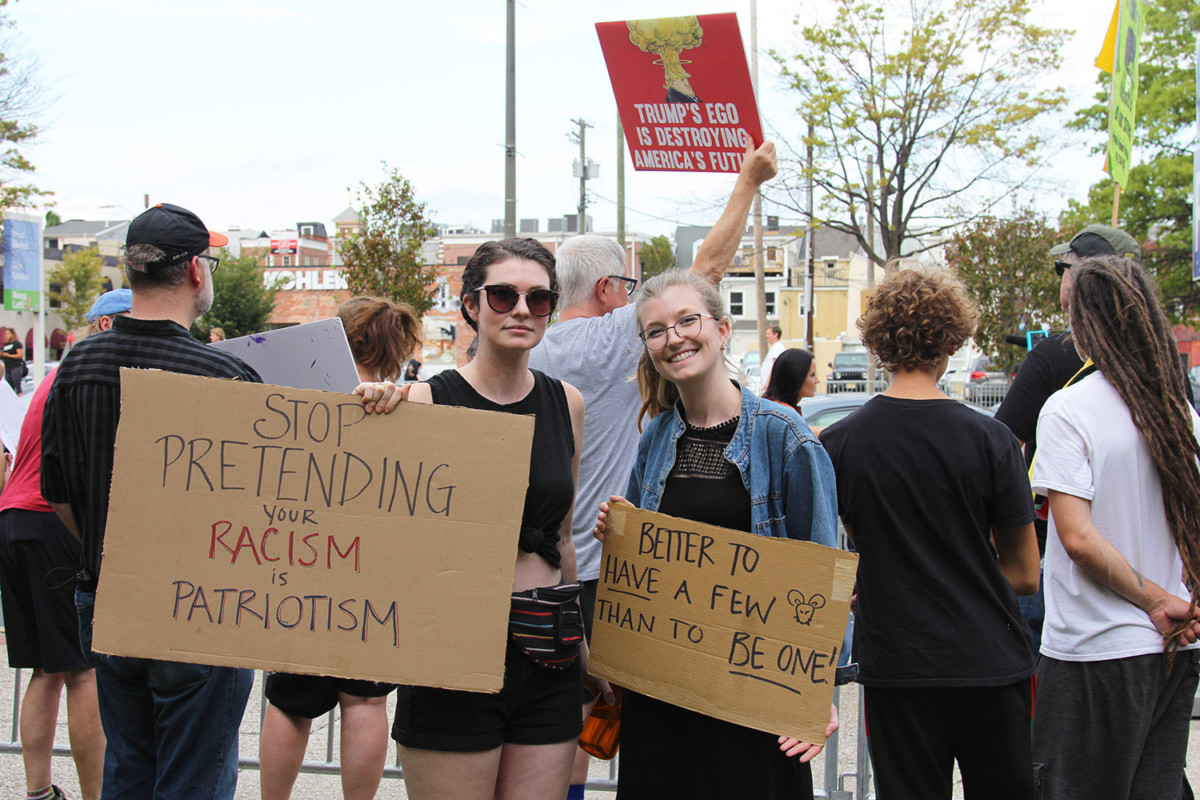 Grace: I think there’s a lot of frustration and anger with the way that things in the country are going, and it’s cathartic to go out and be with people who are also angry and frustrated and shout about it. This [poster] has made its way around a few different rallies in Baltimore. I think that in our country a lot of people like to disguise their racism as patriotism, and then when you call it out, they try to pretend that you’re ridiculous and gaslight you into thinking that it’s about loving our country and not about hating other people.

Isabel: The real question is, what parts of this country do they love and what type of America do they consider great?