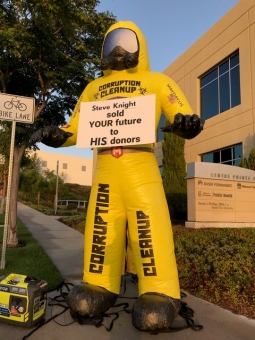 “CleanUp Carl” inflatable is part of a “Clean the House 2018 tour” funded by the PAC Mayday America to get big money out of politics. This photo was taken at a rally against Rep. Steve Knight. The figure will be in San Diego Monday to protest Rep. Duncan Hunter.

September 23, 2018 (San Diego) — A 12-foot-high inflatable man in a yellow hazmat suit will join members of Indivisible on Monday at 8:30 a.m. at a rally at Federal Courthouse Plaza (333 W. Broadway, San Diego). to protest Rep. Duncan Hunter’s alleged corruption as he appears again in federal court on felony charges of embezzling $250,000 in campaign cash.

“Members of Indivisible will bring items that represent some of the Hunters’ staggering number of personal purchases made with donations from lobbyists and other donors to his campaign,” a press release from the group states. “Speakers will connect Rep. Hunter’s corruption by special interests with his votes to repeal the Affordable Care Act and pass the GOP Tax Scam, favoring the powerful over the well-being of his constituents.”

“CleanUp Carl” joins the rally as part of a California “Clean the House 2018 Tour,” by the PAC Mayday America, to get big money out of politics.

Hunter and his wife, Margaret, have pleaded not guilty to the charges. The trial is set to begin after the November election.  If convicted, Hunter, a Republican, could face substantial time in federal prison and would be required to give up his seat in Congress, requiring a taxpayer-funded special election to replace him if he wins in November against Democrat Ammar Campa-Najjar.