“As long as money is speech and bribery is legal, the voice of the people will not be heard.”

A group of activists dedicated to ending corruption in Pennsylvania politics temporarily shut down the the statehouse in Harrisburg Monday after a five-day march from Philadelphia.

Members of the MarchOnHarrisburg group staged a rally outside the statehouse before eight activists from the organization disrupted statehouse proceedings.

The group wants Pennsylvania to pass HB 1291, or Gift Ban legislation, to curtail the power and influence lobbyists have over state lawmakers.

“H.B. 1291 would make it illegal for lobbyists to bribe Pennsylvania legislators with gifts like cars, vacations, and fancy meals,” the group explained in a statement. 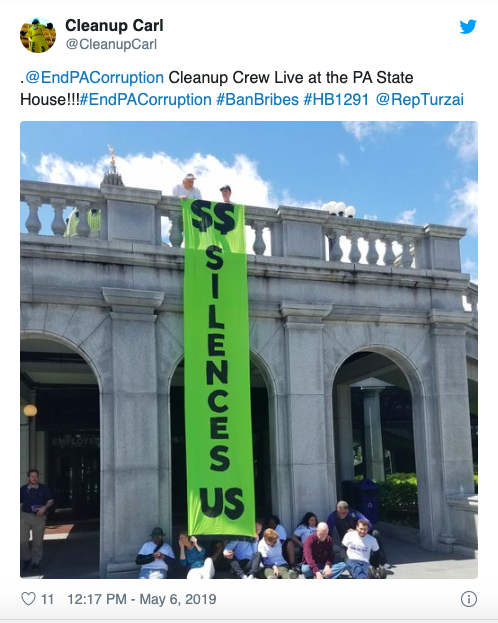 Pennsylvania is one of eight states that has no limit on the amount of gifts lobbyists can give legislators.

“Our legislators cannot serve both money and people,” said Rabbi Michael Pollack, the organization’s executive director. “As long as money is speech and bribery is legal, the voice of the people will not be heard.”

The activists littered the chamber with 500 one-dollar bills, chanted anti-corruption slogans, and dropped a banner from the balcony reading “Some are guilty; all are responsible.”

In all, 20 members of the group, including Pollack, were arrested—12 outside and eight inside the chamber.

Speaker Mike Turzai, a Republican, met with activists after the arrests and told them he supported the legislation.

In a statement, MarchOnHarrisburg communications director Emmie DiCicco said that the speaker’s support needed to be backed up by action.

“While we are pleased that Speaker Turzai publicly supports a gift ban, if H.B. 1291 does not pass into law this session, his statement would become yet another example of the hypocrisy of Harrisburg,” said DiCicco. “We want more than supportive statements; we want action.”

The group plans to continue pushing for change in the statehouse.